… and to tell you about it, I’d have to come out of the closet.

The hobby closet, that is, in my garage. (What closet did you think I meant?)

That’s where I have been trying to build – on and off for the last nine years, mostly off – my HO scale model railroad pike duplicating the Eureka Springs & North Arkansas Railway. I’ve been in there more frequently of late, finding myself drained of ideas, inspiration, energy and will to write blog posts. My creativity takes a different turn when that happens.

The hobby closet is only 4′-11″ x 11′, and occupies the southwest corner of my garage. I think it was originally intended to be a garden/potting room, so any future owners should be delighted to find the shelves I have installed all around its perimeter, just waiting to have large holes cut in them to hold plant pots. (You actually have to duck under the shelving in the doorway to get in; I’m building a loop-shaped pike.) Right now the shelves are covered with cork roadbed for my railway.

I’ve been stymied for several years, trying to find a combination of couplers and trucks (wheelsets, that is) so the scale models of the 80′ coaches can round the tight 18″ curves in the small closet and still stay coupled. A couple of months ago, I found that combination and the halted progress on laying track began again. (Athearn “Commonwealth” trucks and Kadee couplers, plus drawbar mounts for the couplers – for those of you who care.)

The next step will be to wire the track – which passes the current to the tiny electric motors in the engines, and to the lights in the lighted coaches – in “blocks,” since I’m not really interested in graduating to very expensive Digital Command Control systems. That will make it possible to run two trains from a twin power/control pack … in the case of the ES&NA, the excursion train pulled by one of two steam engines and the luncheon/dinner train led by a diesel switcher. I’ll also wire a few simple signals; plus interior lights for buildings like the depot, the Roundhouse and the former “Petticoat Junction” cottage opposite it across Mud Street. 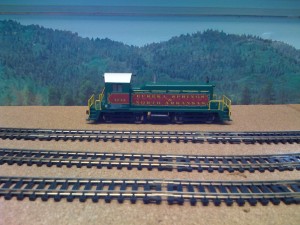 After that, I’ll tie down the track to its final position, making certain that everything runs smoothly – and stays coupled.

After that will come scenery to make it all look natural – like the wooded surround of Livingston Hollow, Junction, and the rest of the railway as it frequently parallels Leatherwood Creek. (I don’t have room to build the town’s water processing plant, which is a source of brief but sometimes pungent natural odors as the trains pass!)

Building and running a model railroad was something that my dad and I enjoyed doing together when I was a kid. When my Mom sold the home where I grew up after he passed away, its purchase price also covered an unmovable 8′ x 8′ L-shaped layout with handmade storage cabinetry underneath, and all the track and switches. I kept the control/power pack, and I’m using it on the ES&NA Junior.

If you have read my blog for a while, you’ve probably already guessed why I’m modeling the ES&NA. You may not know, though, that I am the anonymous author (as they all are) of the article about the railway at Wikipedia, and it features my photos. I’ve taken dozens of pictures there over the years, and harvested hundreds more from the Web. I do my homework on my prototype railway pretty thoroughly.

Passing a few hours in the hobby closet, building or painting or wiring or laying track while the rest of the family is out of the house – Matt at his job; Laura babysitting; Angi teaching, or whatever – satisfies a creative urge I can’t stifle and brings back all kinds of pleasant memories.

So … what’s your secret life? Do you have a hobby? Is there something you like to create that soothes a craving in you to imitate the creativity of the Divine Maker?