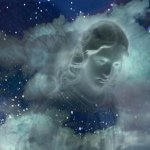 Yesterday, a friend on Facebook asked a group of mostly preachers what they would be preaching about on Sunday, December 25, Christmas morning.

In the beginning was the Word, and the Word was with God, and the Word was God. He was with God in the beginning. Through him all things were made; without him nothing was made that has been made. In him was life, and that life was the light of all mankind. The light shines in the darkness, and the darkness has not overcome it. … The Word became flesh and made his dwelling among us. We have seen his glory, the glory of the one and only Son, who came from the Father, full of grace and truth. … For the law was given through Moses; grace and truth came through Jesus Christ. No one has ever seen God, but the one and only Son, who is himself God and is in closest relationship with the Father, has made him known. ~ John 1:1-5, 14, 17-18

I love the baby-Jesus-in-a-manger version of the story as dearly as anyone. But this version has incredible power in its brevity.

The very Son of God, the Word, who was with God and was God from the beginning, took our form to live with us. The glory of which angels sang was now visible in Him. You could see grace. You could see truth. In Jesus, you could see God.

Want another tiny sample of this part of the Nativity Story?

They wanted to kill Him right there in the temple by throwing rocks at Him, they were so incensed to hear this. He claimed to be God. But truth is a defense against blasphemy as well as libel … and He walked away, unharmed. I have to wonder if their hands were stayed by doubt in their conviction that He was only a man; that a man could not also be God.

Philip said, “Lord, show us the Father and that will be enough for us.” Jesus answered: “Don’t you know me, Philip, even after I have been among you such a long time? Anyone who has seen me has seen the Father. How can you say, ‘Show us the Father’? Don’t you believe that I am in the Father, and that the Father is in me? The words I say to you I do not speak on my own authority. Rather, it is the Father, living in me, who is doing his work.” ~ John 14:8-10

God with Us. Immanuel.

Jesus knew who He was. He knew what Isaiah had prophesied in 7:14, and He knew that “Immanuel” meant “God With Us.” He had to have known what His mother had treasured in her heart for all those years.

And in telling Philip and the other apostles once again Who He was, He was promising to give them the very Holy Spirit within Himself so that God could do His work through them as well.

One more glimpse, this time from someone other than John:

In your relationships with one another, have the same mindset as Christ Jesus:

Who, being in very nature God,
did not consider equality with God something to be used to his own advantage;
rather, he made himself nothing
by taking the very nature of a servant,
being made in human likeness.
And being found in appearance as a man,
he humbled himself
by becoming obedient to death—
even death on a cross!

Therefore God exalted him to the highest place
and gave him the name that is above every name,
that at the name of Jesus every knee should bow,
in heaven and on earth and under the earth,
and every tongue acknowledge that Jesus Christ is Lord,
to the glory of God the Father. ~ Philippians 2:5-11

God became a single cell; a nothing; a thing invisible except through a microscope. God became a baby. A young man. A servant.

God intended all of this to happen, and that was why it was as good as done as soon as Jesus was born, and the angels could sing praise at His birth for what He would yet do as a man, and a servant, and a sacrifice.

Jesus showed us that we could be born anew; become something very different, something still like a human being on the outside, but full of grace and truth and God within.

Jesus showed us that the true glory of God is to serve, to give, to be given and spent out and used up in love to others.

He gave up a throne in heaven to wash dirty feet.

He surrendered His life there to surrender it again here, and to give it abundantly and without measure to anyone who hears and believes and asks.

4 thoughts on “The Nativity Story from John 1”